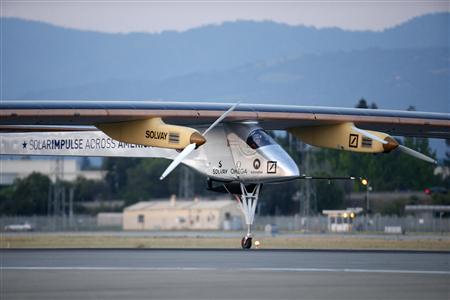 Recently, the Solar Impulse, a plane entirely powered by solar energy set out to transverse across the Untied States. This project took roots back in 2003 with a 10 year budget of $112 million and now in 2013, Swiss pilots and co-founders of the project, Bertrand Piccard and Andre Borschberg, will take turns flying the plane. The project organizers say they aim to increase the awareness of green technology and boost worldwide support of renewable energy

According to one of the pilots, “I hope people understand the potential of this technology and use it on the ground,” Borschberg, who flew for the Swiss Air Force for more than 20 years and “If we don’t try to fly today using renewable energy, we never will.” Although the plane is still in its developing stages, when its completed, it will have a broad impact on the world because although electric cars exists, there has not really been any development of electric airplanes, which will further reduce our reliance on non renewable energy.

The topic of retiring has become a difficult subject.  There is a lot of talk about a retirement crisis.  Many people have become worried about their future.

Mathew Greenwald, the president of the firm which conducted the research for the annual Retirement Confidence Survey, thinks that there are ways to avoid being part of the crisis.

One of these ways is to save an amount worth 20 times your salary.  This amount, plus the Social Security benefits would almost guarantee a safe retirement.  The problem with this is that if a person never receives a large inheritance of family money, it is very unlikely that he will be able to save that much from just his salary.  If he makes good investments then his savings will grow, but still 20 times the salary is quite a large sum of cash.

Greenwald also suggests that employers begin to use auto enrollment into retirement funds automatically.  When workers are enrolled automatically they are more likely to stick with the plan than they are to enroll by themselves.

Yesterday, the Walt Disney Company announced it would stop producing apparel in Bangladesh after a series of unfortunate events that resulted in the deaths of several garment workers. As a result of such a big name leaving Bangladesh, the countries garment manufacturers are worried that other Western companies would follow suit and this would potentially threaten the economy of Bangladesh and livelihoods of millions of citizens would be at risk. Mohammed Azim, who is a member of the country’s parliament and owns garment factories himself remarks, “The whole nation should not be made to suffer,” in reference to safety concerns that were questioned after separate incidents and “This industry is very important to us. Fourteen million families depend on this. It is a huge number of people who are dependent on this industry.”

Several Western retailers have expressed plans to increase factory safety which means they will have to invest in rather than abandon operations in Bangladesh. However, none have made financial commitments to upgrade unsafe factory buildings or to endorse tougher inspections. So far, the common response of big retailer has been pledging money towards relief efforts in Bangladesh.

It’s all fun and games until someone decides to take a stab at someone. In today’s news, a long time joint-venture between Verizon and Vodafone could be getting ugly in no time. Verizon’s chief executive, Lowell McAdam, made an announcement today saying that Verizon might not pay to its two owners this year.

As of right now, Vodafone still owns 45% of Verizon Wireless, but at the end of the day, Verizon Wireless still call the shots and they make the finals decision to when payouts are made. I believe this move has come as a result of Vodafone asking for a much higher price for their acquisition than Verizon had hoped for. Verizon might have planned this move to ultimately give Vodafone a stalemate.

This type of news reminds us all that no matter what business partnerships companies are involved in, there are no friends. At the end of the day, businesses will look out for their own benefit and no relationship or long term partnerships will change that. Business ethics exists but only to a certain extent.

The Oracle of Omaha, Warren Buffett engages in another annual meeting to discuss the future of Berkshire Hathaway’s future. Instead of the usual compliments he receives for profitable investments, he chose a hedge fund manager, Douglas A. Kass to criticize his tactics at their annual meeting on Saturday. Through research, Kass is predicting that the company’s stocks will fall. He points out that Warren Buffett is aging, so the company runs into founder risk. In addition, its growth is slowly down, which may be due to economy downturn even though Buffett is a contrarian investor.

Throughout the years, Buffett has made various profitable investments. However, this meeting will be more interesting because of the challenge he chose. Investors often depend on Buffett’s forecast when buying stocks. By answering questions that Kass prepares, Buffett will be able to bring attention to his company’s annual meeting, as well as, boost his company’s stock prices. Shareholders are also interested in his future plans for the company, such as who will succeed as the Chief Executive Officer, or whether he will continue to invest in more companies.

With the Barnes & Noble’s Nook Tablet already competing with Amazon’s Kindle Fire as reading tablets, the Nook is becoming more competitive as they just added Google’s Android app store and services such as Gmail and Google Maps. This addition comes after there were disappointing holiday sales of the Nook devices whose revenue fell twenty-six percent as reported in the month of February. A negative aspect to this addition of Android apps is that now Nook device owners would also be able to buy and read Kindle titles, and digital books from Google Play. This could perhaps lead to an increase in sales of the Kindle titles being sold, which would lead to profit for Amazon. Google in return, is benefitting from both of these companies that use its services and are expanding on mobile devices. Although Barnes & Noble is declining to state the amount of revenue that would be shared with Google, instead it can be assumed that they will be receiving a similar or higher amount compared to how much Amazon shares as well.

This change in the Nook Tablet beginning to offer Google apps, is the beginning of a change in an increase in profits for Google. Whether or not Nook will see an increase in profits is debatable because they are can access Kindle Fire. The economy is overall moving towards a more efficient and easier access, which can allow future innovators and those wanting to seek profit from companies, that own tablet products can start up their own ideas. The trend for Barnes & Noble, with a decrease in their sales shows how companies overall try to earn high profits.

Since the recession in 2008, the Dow Jones Industrial Average has suffered a significant impact on the index. For the first time, in four years the Dow Jones has hit the 15,000 mark as stocks increased from the boost of confidence in the market. The unemployment rate has been on a decline, as employment was at an all-time low in the last four years. Based on payroll records, as much as 165,000 workers found jobs just last month dropping the jobless rate to 7.5 percent. S&P 500 Stocks were trading 6.6 percent above the 30- day average. The Volatility Index also slid 5.2 percent and has dropped as much as 29 percent this year.
All of these are signs that the economic recovery is heading the right way. The smaller the volatility in the markets, the less uncertainty there is for investors. With the boost in confidence, companies are growing and jobs are being created to stimulate the economy. The Dow Jones Industrial Average breaking the 15,000 point will definitely help boosts investor’s confidence in investing.
Written by: Jessica Ho
Source:
http://www.bloomberg.com/news/2013-05-03/u-s-stock-futures-are-little-changed-before-jobs-report.html

There’s always a critic it would seem, especially when it comes to monetary policy and the direction Ben Bernanke has taken with Quantitative Easing. Federal Reserve Bank of Richmond President Jeffrey Lacker spoke out against Ben Bernanke’s policies, citing risks that could occur with little potential for growth benefits if Q.E. continues.

Although the Federal Open Market Committee has stated that it will continue making large purchases of bonds, versus tapering off their spending, it has since shifted their opinions to that of uncertainty about the future. Now, although it is still buying, the F.O.M.C. may decide to reduce spending if certain signals are sent concerning inflation and the labor market. Lacker claims that the current pace of purchases will not be sustainable. Also, the amount of regulations and weakness in Europe will pose a risk of hurting businesses. However, Lacker does not have a vote on the current policy at the moment.

“Recent reports on retail sales, factory production and household spending have pointed to a slowdown in economic growth this quarter.” Whether or not that will affect the Fed’s future decisions remains to be seen, since the slowdown could worsen if the wrong actions are taken.

Glencore CEO Seeks to Win Over Investors With Dividends

Glencore Xstrata Plc, the largest zinc and stream-coal exporter is looking into a new plan to draw in investors to help the company grow. They are currently working with a plan to increase dividend and share buybacks. Glencore Xstrata assures that investors will receive the return they seek because they pride themselves in investing in only assets that give a good return. Ivan Glasenberg, the Chief Executive Officer of Glencore Xstrata states that the company will give good returns even at the cost of downsizing the company or the company taking the loss opposed to the investors. The company may be able to execute this new special dividend plan by as early as 2014 as revenue is expected to exceed analyst expectations, coming in well above the target of $500 million a year.

Glencore Xstrata’s developing plan for special dividends will make investors happy. The appeal of knowing that a company is doing all they can to give back as much as they can to investors is extremely attractive for investors looking to make gains. The fostering of Gencore Xstrata, a mining company forecasts a economic expansion and creation of more jobs.

DreamWorks Animation SKG Inc. became famous for their animated movies such as Shrek, Kong Fu Panda and more recently, The Croods. Although DreamWorks is known for its success in animation, it is branching off in a different area. They have recently agreed to purchase a YouTube channel called AwesomenessTV for $33 million.

They believe this channel will bring them a faster growing and more diverse consumer pool as they move toward using YouTube as a medium for their digital strategy. AwesomenessTV which has launched on YouTube in June 2012 quickly became one of the most subscribed channels by teens. DreamWorks believes they could use this acquisition as a way to reach out and advertise toward over the fourteen million subscribers and eight hundred million video viewers.

The chief executive officer of AwesomenessTV is Brian Robbins who is famous for producing shows like “One Tree Hill” and “Smallville.” These shows parallel as his YouTube channel consists of programs like teen girl talk show, comedies, dramas, and music. This is relevant to most people as many of us frequent YouTube and this acquisition could lead to extended ads relating to DreamWorks and their projects.