Investors bought many shares of Fairway, the New-York based grocery store, after it went public today.  In its IPO, shares sold for $13 each and reached a level of $17 by the end of today, making the grocer more valuable than competitors like Whole Foods.  Fairway, which has 12 locations in New York, has a business model similar to Whole Foods’s; the revenues of both companies come mostly from high-margin offerings such as fancy produce.

Perhaps the most impressive part of Fairway is its potential to grow.  The company saw a rise of almost two thirds in annual sales between 2009 and 2012.  In addition, Fairway plans to have 300 locations throughout the country, growing at a pace of three or four stores a year.  This potential, yet again, is reminiscent of the success Whole Foods has had in the recent future, which makes it an attractive opportunity for investors.  Investors are particularly excited because grocery growth, unlike the growth of an Internet company, has proven to be more sustainable in the past.

It is very difficult for companies to take hold of the right timing to perform certain actions especially since the economy is extremely volatile. Since Bank of America now knows what they are lacking they can work on making up for these gaps, and hopefully begin to generate more revenue.

In Liu of the Situation 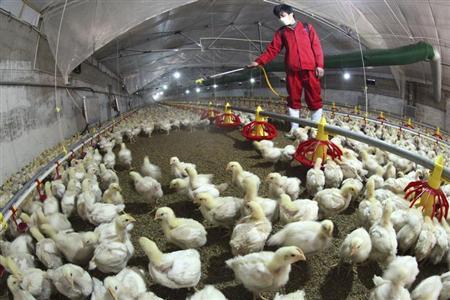 An official of China’s National Poultry Industry Association told Reuters that the recent strain of bird flu that emerged two weeks ago, has caused the industry more than 10 billion yuan in losses, which is around $1.6 billion. Efforts by authorities to contain the H7N9 virus include slaughtering thousands of birds and the closing of live bird markets in Shanghai and Beijing. Despite efforts, new cases of infection are reported daily, with 14 reported deaths and 63 infections.

According to Liu Yonghao of New Hope Group, the country’s largest producer of animal feed, most of these cases are situated in eastern China and consumption levels of chicken have fallen down to below half the original. “Chicken prices are falling which will lead to losses for breeders,” New Hope’s Liu said last week. “There are more than 100 million farmers raising chickens who will need to be supported.” China is the world’s second largest poultry market after the United States, but the string of recent outbreaks have caused consumer confidence to drop with prices of high quality chicken dropping to a fourth of previous prices.

Kentucky is making plans to bring more investment from Toyota into their state, working to expand an already large establishment of factories with the foreign car company. They plan to do so through tax incentives, and offering $146.5 million. In exchange, Toyota would have to add jobs and capital to the state. It is expected that Toyota would need to “invest $531.2 million and add 570 full-time jobs to receive the full value of the credits” according to the  Kentucky Economic Development Finance Authority.

Toyota has not yet reached a decision on the offer. Given the history of the plants in Kentucky, however, it seems very likely that the car company will continue to add to the Kentucky investments. Opened in 1988, Georgetown, Kentucky has been the the center of production for the Camry sedans with $6 billion invested into the site. The Camry has been the best selling sedan for the past 11 years.

Personally, I see optimism in Kentucky’s decision, in that they are trying to work with other companies outside of the country to increase job growth for their state and bring jobs stateside.

With the smartphone industry growing so rapidly, companies must be able to compete with each other to stay in the market. MetroPCS communication Inc. is planning to merge with T-Mobile to increase their competitive advantage over larger carriers such as AT&T Inc. and Sprint Nextel Corp. The two companies are working out a deal to merge MetroPCS with T-Mobile, and with the recent changes made to the agreement; the merge is more likely to take place. This contract will combine the fourth and fifth biggest carriers into a single company while reducing the debt on the combined entity by $3.8 billion. Interest rates were also adjusted to be half a percent lower to lighten up the deal even more. Although the debt will be lower, the amount of debt will still be an obstacle for the combined companies to compete at full strength. Deutsche Telekom, the parent company of T-Mobile has extended the lock up period which prevents shares from being publicly sold.

T-Mobile being one of the biggest carriers in the past has fallen behind to carriers like AT&T and Sprint. Unable to offer smartphones that appeal to the public until recently has cost T-Mobile to lag behind the two other companies. This merger with MetroPCS and the introduction of iPhones with no contracts may be able to turn the company around. Combining the fourth and fifth biggest carrier will definitely serve as a stronger advantage in the industry.

For the fourth time in the past five months, the consumer price index has been below the Fed’s 2% goal. This has been an encouraging trend for those who believe the Federal Reserve should continue their stimulus package, which has been infusing the economy with “easy-money” by keeping borrowing rates low. The $85 billion monthly purchase of bonds by the Fed implemented last year has recently become a largely contested topic; specifically speculation regarding when the program will be tapered off. Several Fed officials are interpreting these readings as positive indications to continue with the program while others are worried that a financial bubble will be created if it continues.

The current monetary policy of the Fed has drastically expanded the size and composition of its balance sheet; a cause for concern that the central bank will struggle to reverse its bond buying program in the future. I’m staying tuned to see how the tapering of the stimulus package will affect the economy.

Everyday Apple makes its way to headline news in one way or another. On Wednesday, April 17th 2013, Apple saw its shares dropped below $400 per share and it is the company has seen since the year 2011. One of Apple’s suppliers, Cirrus Logic Inc., a company that makes energy and audio chips has seen their shares drop correlating to Apple’s poor performance. Their revenue report showed poor performance and their stock dropped 14%.  Cirrus Logic Inc.’s chips that Apple uses are for both the iPad and iPhone, poor sales could indicate the poor performance of both companies.

It is very saddening to see Apple’s shares dropping almost every single day. A stock that once had seen their share above $700 are now seeing their lowest prices for ever two years. Google, one of Apple’s biggest competitors are seeing their stock performing extremely well and one of Android’s best sellers are releasing in the near future. I am curious to see how Apple’s stock will do in the upcoming months.

Over the last decade, the craze of cupcakes has taken over multiple gourmet shops and television shows. It hit a high mark when Crumbs Bake Shop Inc., debuted under the NASDAQ Stock Market in June 2011 and was trading at more than $13 a share, until now where it has sunk to $1.70. It has dropped more than 22% from previous projections. Their excuse for the drop is because of Hurricane Sandy that caused store closures and a loss of $700,000 in sales, but many suggest it is due to the ending of the craze. Demand for these gourmet cupcakes have been declining because it is easier for people to bake cupcakes at home rather than paying almost five dollars a cupcake. Since the cupcake business has a low barrier to entry, the field has become very overpopulated with many competitors that include individual and chain bakeries.

I had a feeling that when this craze began that it would not be possible to last long and for companies to survive in such a market where many other businesses were also beginning to start baking cupcakes. Eventually the idea would be overwhelmed with other competitors. I do not see the cupcake business continuing to succeed within another five years because if it has already been two years and their sales are beginning to drop drastically, it does not seem possible for businesses to continue making profit off of cupcakes that people will eventually be tired of consuming.

For a long time, Yahoo! has been losing market share as an Internet company. After the company hired Marissa Mayer to be its CEO, the company has shown improvements. Its stocks has risen more than 50% since her arrival nine months ago. In addition, Yahoo owns 20% of Alibaba, a Chinese Internet company. This company has been doing well and is preparing for an initial public offering. Analysts are valuing the company at $55 million and more. Yahoo’s profits increased 36% and exceeded analysts’ speculations because of this investment. Alibaba’s market capitalization may be double to five times Yahoo’s. Other operations of Yahoo are lagging behind. They used to be the biggest seller of display ads, but due to the competitiveness of this industry, they no longer have this advantage. The company hopes to improve users’ mobile experience by hiring more engineers to develop programs. In doing so, they also hope to restructure its core products.

Yahoo! was once a popular site that offered a variety of information. However, it is difficult for them to stay competitive when developers are starting new and improved sites. Yahoo will have to expand its operations to attract the younger audience and retain its users.

Louis Vuitton is trying to restore the way society views its brand. They want to bring back the exclusive, upper class mentality when people purchase their products. For this reason they have boosted prices of their products by roughly 13% in recent months. They hope by raising their prices it will restore Vuitton’s world-wide exclusivity. In addition to bumping up price tags, they have halted new-store openings and are promoting their more expensive leather products over their entry-level canvas bags. They stopped promoting their cheaper products to avoid “overexposure of the brand.”

Louis Vuitton’s methods can be extremely dangerous as it alienates lower market consumers in hopes of attracting higher-end consumers. The whole luxury industry faces the question of pricing and exclusivity. People purchase their products to be different, however if the brand is successful many people won’t see it as exclusive.

Vuitton’s rise in prices can also have an effect on the whole luxury-good market as it has strong pricing power. Their rise in price tags can give other competitors like Prada and Gucci reason to charge more also.